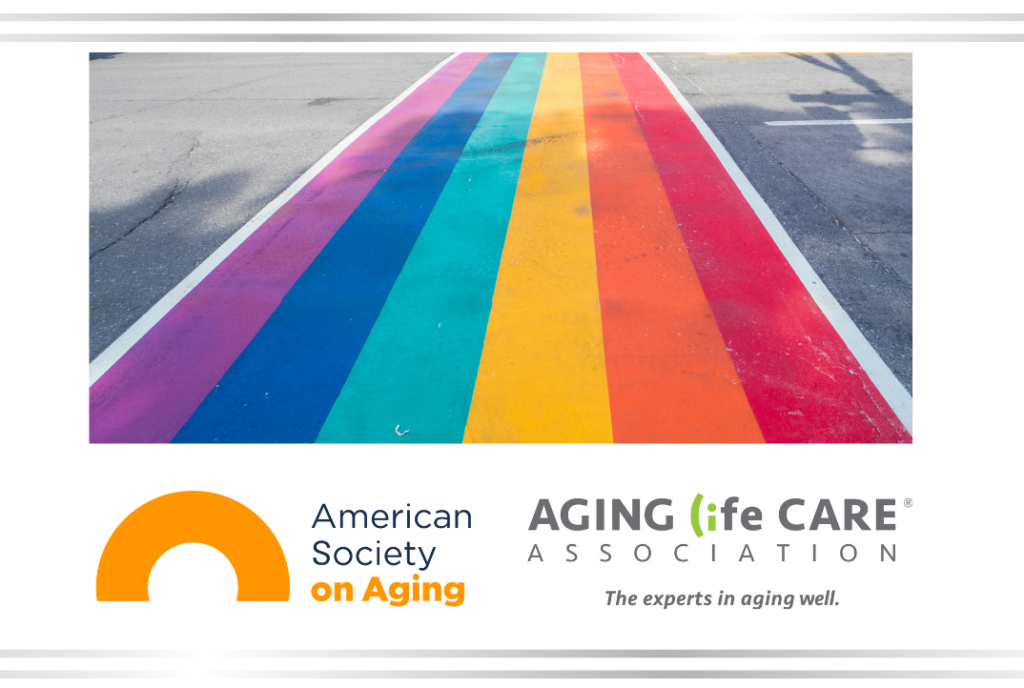 By: Denny Chan And Natalie Kean, originally posted in the ASAging Generations Blog

Ten years ago, Justice in Aging and SAGE wrote a report, “Stories from the Field,” on discrimination LGBT older adults experience in nursing homes. We heard reports of staff at these facilities refusing to help gay men bathe or to use transgender residents’ correct pronouns. This was in addition to discriminatory policies that made it difficult or even impossible for transgender people to get Medicare coverage for prostate and pelvic exams and bans on gay men of any age donating blood. LGBT older adults living in the community have faced other barriers such as discriminatory housing policies.

While new legal protections have been enacted since we published our report, unfortunately many LGBT older adults are still discriminated against and many more continue to live in fear that they will be.  As we documented in our special report on the legal needs of low-income LGBT older adults, the effects of discrimination and poverty among LGBT individuals compound over the lifetime, such that many experience increased levels of poverty and other barriers as they age.

This is especially true for LGBT older adults of color and individuals with limited income and wealth, including immigrants who, depending upon their immigration status and length or residency, may be barred from Medicare, Medicaid, Social Security, Supplemental Security Income and nutrition and housing assistance. These immigrants can end up with little or no choice in providers of health, long-term care and social services.

In the past ten years, we have seen a foundation being built for equal rights and nondiscrimination for LGBT older adults, and it is worth celebrating. The courts have decided cases establishing landmark anti-discrimination protections and expanding rights for LGBT individuals, including older adults.

The U.S. Supreme Court’s decisions striking down federal and state bans on same-sex marriages in U.S. v. Windsor and Obergefell v. Hodges allowed Social Security spousal and survivor’s benefits to go to LGBT couples and their families and opened the door for Justice in Aging and others to fight against the Social Security Administration’s other discriminatory policies. These decisions continue to help LGBT older adults get relief from benefits miscalculations that occurred even before the cases were decided.

Most recently, in Bostock v. Clayton County, the Supreme Court decided that the prohibition of discrimination in employment “on the basis of sex” in Title VII of the Civil Rights Act of 1964 also prohibits discrimination against individuals based on their sexual orientation or gender identity.

The Affordable Care Act included the Health Care Rights Law (Section 1557). It is the only federal law that bans discrimination on the basis of race, color, national origin, sex, age and disability specifically in health programs and activities that receive federal financial assistance, and it is the first federal law to prohibit sex discrimination in healthcare.

The Push Back Against Progress

Unfortunately, the past ten years have also been met with persistent attempts to attack the rights of the LGBT community. In 2020, the Trump Administration eliminated these explicit protections for LGBT individuals in the Health Care Rights Law regulations. These rollbacks, along with removal of protections for limited English proficient older adults, undermine LGBT older adults’ rights and make it harder to seek redress from healthcare discrimination in court.

Other regulatory actions, such as expanding grounds for health and social services providers to deny services to LGBT individuals and proposals to permit homeless shelters to discriminate against transgender individuals when assigning housing, demonstrated the severe and ongoing hostility toward LGBT individuals.

The attacks continued in court, as well. Last fall the Supreme Court heard oral arguments in Fulton v. City of Philadelphia, a case challenging Philadelphia’s decision to end its contract with a social services agency that refused to certify same-sex couples as foster parents. And the effects of intersectional discrimination against LGBT individuals play out in the COVID-19 pandemic, too, with LGBT people of color twice as likely as white non-LGBT people to report testing positive for COVID-19.

That is why Justice in Aging has joined other advocacy partners in actions to undo these harmful changes and repair the damaging effects of this discrimination. We are challenging the rollbacks to the Health Care Rights Law in court and joined a brief with many other aging advocacy organizations in Fulton.

LEGAL PROHIBITIONS ON DISCRIMINATION CAN BE ADVANCED QUICKLY THROUGH LAWS AND POLICIES—BUT, IT TAKES THOSE POLICIES BEING IMPLEMENTED AND LITIGATED TO MAKE PROTECTIONS REAL.

President Biden signed an executive order extending housing anti-discrimination protections to LGBT individuals, and recently withdrew the prior administration’s proposal to permit discrimination against transgender individuals in housing programs and homeless shelters. The Biden administration also announced that it will interpret and enforce Section 1557 prohibitions on discrimination in healthcare based on sex to include sexual orientation and gender identity, consistent with the Supreme Court’s ruling in Bostock.

Congress has taken up the Equality Act, which builds on Bostock to codify that the prohibition on sex discrimination in major civil rights laws includes sexual orientation and gender identity. The bill, which has passed the House, would directly impact LGBT older adults by expanding the definition of sex discrimination in the Civil Rights Act of 1964, the Fair Housing Act, the Equal Credit Opportunity Act and other laws.

The Equality Act would also expand the definition of “public accommodations” to include healthcare and legal services providers, banks, transportation, food banks and online retailers and service providers, among other businesses and locations. This expanded definition would increase anti-discrimination protections for LGBT older adults, not only on the basis of sexual orientation and gender identity, but also race, national origin, including limited English proficiency, and other protected classes.

If it becomes law, the Equality Act will strengthen LGBT older adults’ rights to access healthcare, housing, long-term services and supports and other aging services without discrimination. Ongoing discrimination also is why Justice in Aging has been championing principles for equitable COVID-19 vaccine distribution to ensure that older adults who are most at-risk do not encounter barriers to getting the vaccine.

As the past 10 years have shown us, legal prohibitions on discrimination can be advanced rather quickly through laws and policies—and this is certainly important. However, it often takes those policies being implemented and litigated to make the protections real. We are encouraged by the Biden administration and Congress taking steps to put more anti-discrimination and equity-centered policies on the books.

Justice in Aging will continue to fight for these types of protections and make sure that those that are passed are robustly implemented so that LGBT older adults, especially those who have been harmed the most by systemic discrimination, can age in dignity and justice.