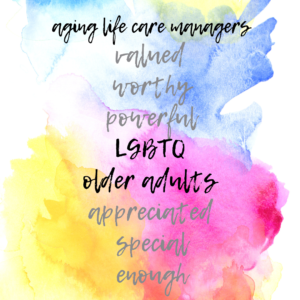 While Aging Life Care Managers come from a variety of backgrounds and expertise, they all have high qualifications, certifications, and uphold ALCA’s Standards of Practice and Code of Ethics.

Founded in 1985 by a handful of geriatric care social workers in New York City, the organization has grown to be nationwide and include educated professionals experienced in any of several fields related to Aging Life Care management, including, but not limited to counseling, gerontology, mental health, nursing, occupational therapy, physical therapy, psychology, or social work with a specialized focus on issues related to aging and eldercare.

ALCA also aims to diversify membership by highlighting members not only in background, but in race, gender, and sexual orientation.

Here is one member’s account of her life as an active LGBTQ advocate, and her journey to Aging Life Care Management.

I grew up in a bi-racial household in the Washington D.C. area and I’ve been out as a lesbian since I was in my early twenties.

In my twenties, I was active in volunteer work in recreation for the handicapped. I was joined by Gallaudet students who were deaf helping blind children play beat ball. We also went to Tracks together to play volleyball and enjoyed really loud music (they could feel the vibrations). I would try to sign the words of the songs.

I also went to Act Out marches and had the pleasure of working at a Dupont Circle store.

After Hurricane Andrew I moved to St. Petersburg, FL in 1992. Here I worked hard to build friendships and community within my LGBTQ community.

I founded and ran a restaurant with a former partner. We served the LGBTQ community offering live music and drag shows on the weekends. We used the space when we were closed for P-FLAG meetings and LGBTQ youth meetings. We only lasted a couple years, lost more money than we made, but had so much fun. We ended our relationship as a couple, but we would both do it all again, no regrets.

I sang and played in duos and trios in coffee houses and a few LGBTQ bars. During the day I found myself working in healthcare because they were plentiful. I entered a new relationship with my now wife. We went to Tallahassee to protest the law against LGBTQ adoption in Florida and speak with state representatives.

After 5 years working in Oncology, I went to Massage school and became an LMT working for Chiropractors and Spa owners. Then back to school for nursing. A year out of school I landed my dream job as an LPN with hospice, I started part-time on call.

ALCA 2020 Board President Liz Barlowe was just starting her own care management company and was looking for part-time help. She put out feelers that reached me and, after repeated reminders, I reached back. I continued to work two other jobs: one in massage and for Hospice.

As I gained knowledge through Liz’s training and as her business grew, I had to make a choice. I gave up hospice but continued to work as a massage therapist while gaining experience as a care manager associate.

The time came where my services were needed full time in care management. I’ve worked for Barlowe & Associates for almost nine years and June marks five years full-time. My wife and I have been together for 21 years. She works for the city, which offered same-sex partner benefits before our marriage was legal. St. Petersburg provides great affordable benefits for us both.

Cindy also writes about her experiences in advocating for LGBTQ Seniors in St. Petersburg:

A few years ago, I started attending our local Better Living for Seniors (BLS) committee meeting for LGBTQ elder issues. We met in the conference room of Pinellas County Area Agency on Aging. There were other care managers attending as well as an owner of a home care agency, an elder law attorney, an owner of a senior home fitness company, a representative from a local crematorium, and a marketer from a senior living community.

Some of us identified as part of the LGBTQ community, and some friends of the community. Working with our local Senior Center they organized a health and wellness fair held at the Senior center with free food and drinks, many health-related vendors with lots of swag to give away, free living-will legal assistance, speakers, and a trailer running on the big screen that showed still photos of historic moments and activists in the LGBTQ awareness movement.

The plan was to make it an annual event adding live music and food trucks the second year. The first-year turnout was low, but it was new, and trying to notify our target audience was challenging. I wasn’t able to attend the second year but that was the last one they held.

Afterwards, I volunteered at the Pride BLS tent providing handouts (The LGBT Elder Initiative Resource Guide), printed for us by AAoA, some of which went to friends as many of them are older than me.

The next year I was asked to serve on an advisory board that had split from the BLS committee due to a group desire to provide direct services, which BLS was prohibited from doing. This group began meeting at Empath Health offices, which had a direct services division called Epic, and which provided services to our HIV+ community and those living with AIDS.

The plan was to develop a division under Epic to provide direct services to LGBTQ elders — all under the umbrella of Empath Health — which encompasses our Suncoast Hospice. There were grants to apply for as funding was needed.

One of the first big projects was a showing of the film Gen Silent, for which we had to gain permission and pay. There were screenings in St. Petersburg as well as Gulfport FL in 2019. A volunteer call program was started to call and check in with LGBTQ seniors. This has remained and been a main source of outreach during the pandemic. I am no longer active in Epic Generations as my work in care management extends into after-hours and weekends.

I will say – it is amazing to look back and see ideas become tangible organizations that serve an underserved population. I am proud of my efforts and our work and I hope more people will be inspired to recognize, and take care of, our LGBTQ older adults.

About the Author: Cindy Hillman, Aging Life Care™ Associate at Barlowe & Associates has over a decade of experience navigating the resources and choices for seniors living in Pinellas County. Since 2000 Cindy has been working in healthcare primarily with older adults. She is a nurse and massage therapist and worked with specialists in the fields of Cancer, Blood disorders, Lung disease, and Chiropractic. Cindy has volunteered for CASA, The American Cancer Society, the Federal Prison at Coleman (Women’s Education Department) and Hospice of the FL Suncoast. She sits on the Advisory Board for Epic Generations.