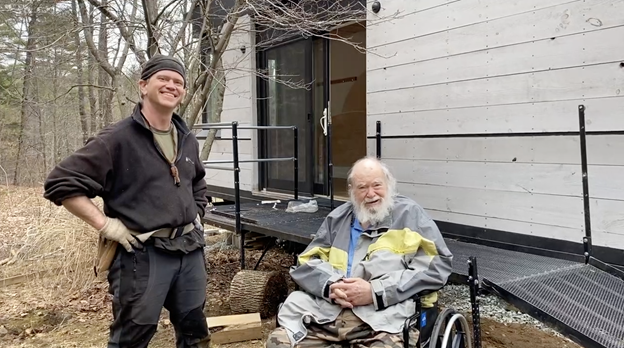 Bob and his father, John, in front of the newly delivered Wheel Pad! Brattleboro, VT

What does a family do about an aging parent who lives far away on his own? This dilemma faced Bob and his wife Jennifer Jacobs. Bob’s father, John, had always been independent. Once a professor of Histology at the University of Illinois at Chicago’s dental school, John, now 87, was living on his own in Chicago. Bob, a busy tree arborist from Brattleboro, Vermont, found himself flying to Chicago frequently to check up on his father.

When a friend called to say John had fallen and was in the hospital, and after another trip to Chicago to see his father out of the hospital and into a rehabilitation facility, Bob knew that his father needed to be closer by.  With some planning, the rehab facility in Chicago released John to a rehab facility in Brattleboro. Because John was not yet ready for a nursing home, Bob looked at assisted living facilities in the area. John, however, was using a catheter, and assisted living places would not take him. With no place to go and no apparent options, John remained in what was meant to be temporary rehab. Adding to the dilemma the family faced, the coronavirus pandemic was starting to take hold in early March 2020; a rehab center was no place for an aging parent to be. Although John sometimes used a walker, he was increasingly reliant on his wheelchair for mobility. Bob and Jennifer’s home lacked space for another, nor was it wheelchair accessible. They were at a crossroads.

While worrying about how they could possibly navigate having John live with them, Jennifer had an idea. She had been involved in organizing a Tiny House Festival in Brattleboro, where she met Julie Lineberger, the owner of Wheel Pad, the most unusual house on display at the festival. It was not an ordinary tiny house, it was a wheelchair accessible module that could attach to Bob and Jennifer’s home via a connector! It seemed to be the perfect solution to freeing John from the rehab limbo he was in. Jennifer’s plan was confirmed when she called Julie. After a bit of advance sitework, installation took place over a weekend.

As a regular process for all of our clients, Wheel Pad creates a rendering of what your home will look like after installation. Here’s an example of what we showed Jennifer, Bob, and John. 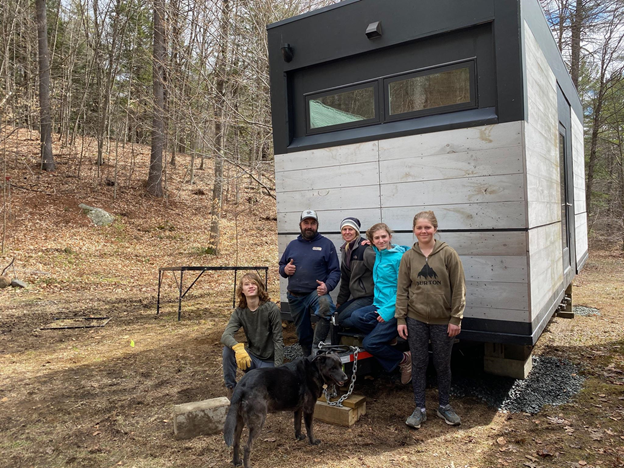 Far left, John’s grandson with his dog, Olive. Behind them, the family who previously leased this Wheel Pad. Sean suffered a Traumatic Brain Injury as a result of a motorcycle accident. The family insisted on helping to deliver and install the unit for Bob, John, and Jennifer.

John has been living in his Wheel Pad for a couple of months now, and he expressed the wonderfully positive impact it has had. He feels like a part of the family, yet has his own private space with control over his climate. When he sometimes feels colder than other family members, he can go off into his own domain and turn up the heat. John noted how well-designed the unit is. His one suggestion was to move the heater controls from the floor to a spot more easily reachable from a wheelchair. 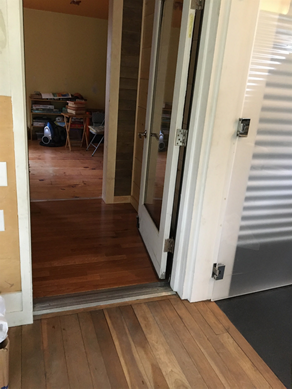 The view from Wheel Pad into the main house via a connector.

It turns out, John is leasing an early model Wheel Pad, and all current Wheel Pads have heating controls at wheelchair height! He can easily transfer himself to the bed and the bathroom and down the ramp to get outside. He gets the benefits of rehab with a visiting nurse and physical therapist who come and work with him in the privacy of his own space without entering his son’s home and disrupting the family. The visiting nurse has been most impressed with John’s Wheel Pad and reflected that it could help many others in his situation. 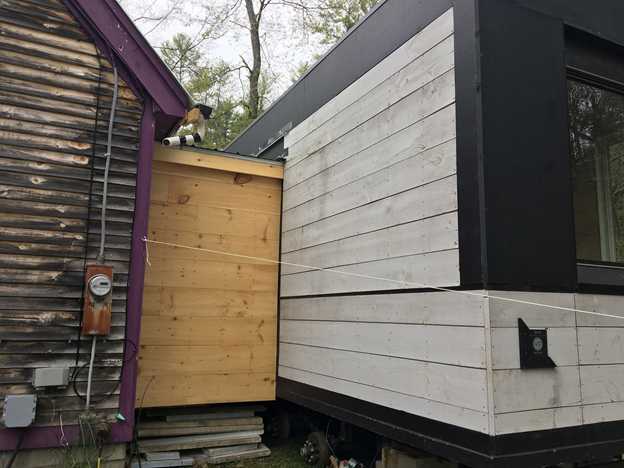 The fully installed Wheel Pad connector as seen from the outside.

Bob and Jennifer now breathe a collective sigh of relief at having Dad at home with them and safe from the ravages of the pandemic. They take meals together, enjoying both social time and privacy. John manages many of his own needs such as organizing and taking his medications, and, when he feels like it, he can still beat anyone at Scrabble! 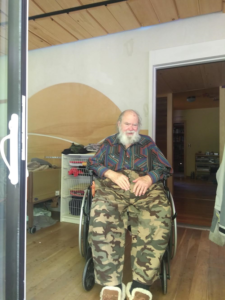 John in his new Wheel Pad!

With the help of Wheel Pad, John, Bob, and Jennifer are all partners in navigating this stage of John’s life with dignity, as much independence as is safe, with the security of family nearby. . . a gift for all!

About the Author: RJ Adler is the Business Development Director at Wheel Pad. Based in Vermont, he likes market-based solutions and building businesses. He spent his early career as a teacher, then switched to the solar energy industry, before moving into housing. He finds that the issues creating the energy and climate crises are similar to those facing the housing shortage, and they are fun problems to solve. Most often you’ll find him skiing, in a canoe, or dreaming about tinkering around the house. He’s always happy to have a conversation at rj@wheelpad.com.